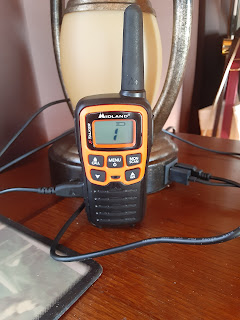 As if the cell phones weren't enough, we now have a set of walkie-talkies. Yep, we are going old school. And while I rolled my eyes, I said nothing. To be truthful, they are a good safety addition here on the Manor. Too often we don't hear our phones ring when we are outside, which is fine if we're not calling each other. Family and friends know to leave a message. They know we're outside somewhere, probably with some piece of equipment running and it's okay. However, being able to reach each other is vital.

These little walkie-talkies have THE MOST ANNOYING call ring you'd ever want to hear. It's loud. We tested it out, Himself being in the house and me in the greenhouse, and it's an attention-getter. Did I mention the call sound is loud? I can put this anywhere in the garden and hear the call ring, and since it's a closed system, I'll know it's him. It's supposed to have a twenty-mile range, so I'm going to test it out on my walk through the woods. If it reaches three to four miles, that's great! It won't replace my phone on my walk, though, and after we test it out, I'll likely still rely on my phone only.

It will be good to have this added connection whenever Himself is outside and I'm at the computer. I'll also appreciate that we won't have to bellow for one another and have my cousin come up to see what's wrong.

And if our cell service goes out from a sunspot, a backup plan is a good thing.

Don't tell the Lord of the Manor I said that. He's already quite proud of himself for coming up with the idea of going low-tech.

The Lady of the Hideaway