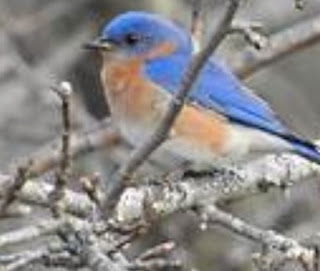 When I was a girl, great numbers of Eastern Bluebirds lived here during the summer. My grandfather must have had a good twenty birdhouses just for them. He always painted the birdhouses blue so he could keep a tally on nesting pairs. Houses for the little wrens were brown, and houses for all comers were white. It's just the way he did things.

Until about two summers ago, seeing a bluebird had gotten to be a rare and exciting thing. This year was a real treat. They were everywhere. Not even Loki's presence dissuaded them to nest in our woods.

Yesterday, a very rainy day indeed, I glanced out the north windows of my sunroom office and found the ground literally moving. A huge flock of bluebirds had landed on their way south. I reached for the binoculars and of course, they took to wing. All but one poor unfortunate, that is. It wasn't my movement that startled them away - it was Loki. Quick as lightning, he snatched the straggler.

Fear not - the story ends well.

Loki carried his catch to the patio, where the bird got loose and flew skyward only to meet the patio roof. He then hopped from screen panel to screen panel. I had visions of little talons ripping my expensive screens but I don't think Mr. Bluebird caused any damage. I grabbed Loki and tossed him (yes, tossed) inside the house. Then I needed a broom to encourage Mr. B to fly out the opening to join his flock. It took a few swipes but he finally got the idea and slipped through the opening to freedom.

I was relieved the bird was uninjured. We've left about half an acre in the southwest corner of our property as wilderness for the birds, squirrels, rabbits, and whatever other small animals may need shelter. Even snakes because we know they're around, too.

Maybe I should ask the man of the manor to build a few bluebird boxes and paint them blue. It would please my grandfather's spirit.

Posted by KC Kendricks at 2:20 PM No comments: 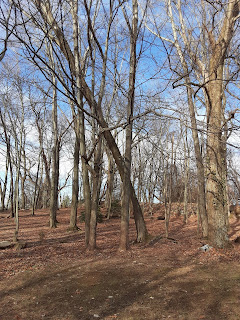 There's a long list of hurricanes that have impacted the Mid-Atlantic region, but the one I remember most clearly is Isabel in September of 2003. Isabel reached us, powering over two mountains to make life memorable for a few days.

We knew she was coming - how could we not? It was all over television channels when she reached a Category 4. By the time she got to us, here in western Maryland, they called her a tropical storm. We were concerned, but not overly so. We'd live through a lot of storms. We could do one more.

Isabel hit. The governor of Maryland declared a state of emergency and we started to watch the weather broadcasts a bit closer. The rain came and the wind blew. Sometime around midnight on September 18, a Thursday I think, we caught a micro blast and an eighty-foot oak tree fell a mere ten yards from the house. It brought me out of a sound sleep, let me tell ya. A few smaller trees came down, a few across the driveway which necessitated cutting our way out with a chainsaw. One of the big maples to the west started to go but got hung up in the trees surrounding it. It's been leaning ever since.

We joke about how much firewood is in that maple. Suffice it to say it's a lot. Taking it down will be tricky, which is why it's still standing, but it's got to come down soon. I'd rather it comes down in the manner we choose and not in the middle of some dark and stormy night. They make a lot of noise when they come down on their own, and I need my sleep.


Posted by KC Kendricks at 6:30 AM No comments: 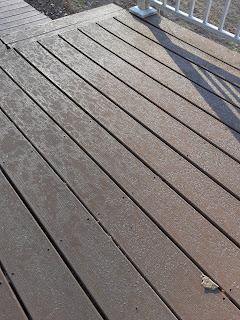 Winter is not anathema to me. I've no desire to flee the season and head south. I'll grant you that living in the Mid-Atlantic region of the United States our winters are not as severe as more northern climes, but these are the only winters I've ever known. Or care to know.

Maybe being in tune with the land makes the difference. When I go outside, my shoes do not walk on concrete and asphalt. Instead, my steps are made on the earth itself. I see the dull grass and bare trees and know they are merely sleeping, resting in preparation for the magic to happen come spring.

Winter is full of patterns if you know where to look. Yesterday morning, the front porch was covered in a thin layer of frost. It lay in a sparkling design only ice and sun could create.

I stood at the door, coffee cup in hand, and watched as the warming day erased the handiwork of night. Then it occurred to me to take a picture. I'm sorry I couldn't capture the sparkle, though. A few moments later, little cat paws marred the pattern as Loki decided ten minutes was enough time in the great outdoors.

Such a beautiful thing to see, frost sparkling on the porch.

Posted by KC Kendricks at 6:12 AM No comments: 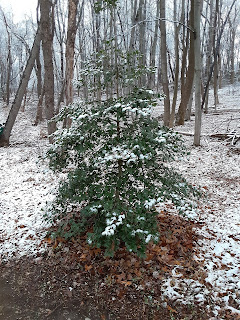 For as long as I can remember, the one thing I wanted above all else was to be the lady of the manor. I have three of the most beautiful acres on the earth, and I want to give it the care and tending it deserves.

That goal is closer than ever. I've dropped back to a four-day workweek and so have more time to enjoy my "manor." This blog will, hopefully, chronicle my journey forward.

I am many things in this life: wife, wage earner, caregiver, author, administrative assistant, aspiring chef, and an accomplished organizer. Up until now, a lot of my personal life has seeped into my author's blog, Between the Keys. I'm sure that will continue from time-to-time.

But not every book reader cares to share my reflections on living in the country, or where I've been and what I'm doing. Conversely, if you landed here but would rather learn about my books, click over to Between the Keys.

I was born about five-hundred yards from where I live. My grandparents gifted me with three acres and here I've been since 1981. My roots go deep. There are thirteen holly trees on my property and I didn't plant any of them. They grew from seeds birds carried in, most likely from the holly trees my grandfather had at the old homeplace. Of my parents and grandparents, it was Pop who had the biggest influence on my life. I choose the name Holly Tree Manor to honor him.

And so begins the chronicle of my life as I ease into "retirement" and begin to embrace my fondest wish - to become the Lady of Holly Tree Manor.

Posted by KC Kendricks at 6:53 PM No comments: