"A treasured memory is the gift of time" 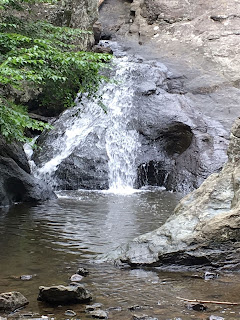 I saw a quote on Twitter that immediately took me back to a halcyon summer day when I was around ten or twelve. Isn't it strange that the phrase, "treasured memory" took me to that singular day? No, it's not. That's what treasured memories are - singular moments in time.

I remember the day so well. My cousin Linda was staying at my house for a few days (we traded back and forth between our homes all summer long). My mother had taken a few vacation days and we three "girls" needed an adventure. We decided to take a drive to Cunningham Falls State Park and walk back to the falls.

The falls at Cunningham Falls State Park isn't anything spectacular, but they are very picturesque. Catoctin Creek meanders its way through the park, a shallow stream beloved by fishermen. Like many creeks, it's rarely deep but it is rocky and wide. It feeds the falls with its clear icy water.

Once we were at the falls, one of us and I think it was me, thought it would be fun to climb to the top of the falls. Now, this is only about twenty feet and it's a shallow climb on the right side. So up we went and we sat in the sun for a while. Then one of us and I know it was not me, suggested we mosey upstream, rock-hopping. So we did.

We played in the woods for a couple of hours and then took the paved road back down to the car. That one day stands out in my memory. A perfect day spent with the two people who were most important in my life at that time.

My cousin Linda and I still talk about that day. Our lazy days are long behind us. We have spouses and responsibilities, but we also have treasured memories.