Finished - clean and tidy, ready for next season 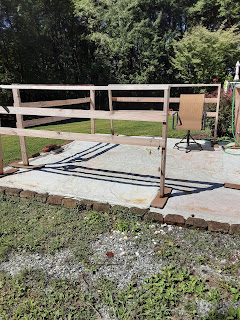 Yesterday was the day I'd been waiting for! I picked the very last three tomatoes and four peppers of the year! Then I set about tidying the garden coral for next year.

It was a beautiful morning, too, with temps around the 65F mark. I was outside early so I could work in mostly shade. I put the bucket on the John Deere 1023 and moved the remaining five-gallon grow buckets and grow bags to their storage area. Then I scrubbed the little table, swept the tarp, and then dumped a bucket of hot soapy water on it, and swished the broom around before rinsing.

You may wonder why I'd want to give the area the hot water and soap treatment, but it's important to keep a garden area clean so as to cut down on pests, mold, and mildew. Besides, it looks a lot better if it's clean and tidy.

Looking forward to the 2023 growing season, the plan is to do a few things differently. I'm not going to transplant every little seed that sprouts. I had too many tomatoes crammed into too small a space. I was able to make sauces, etc., which I wanted to do, but we have a lot of top-notch local growers in my area. It may be more time effective to purchase a bushel of tomatoes from one of them to do the canning next year. A high tunnel would also allow me to use the garden coral area for what it was installed for - a small pool.

I also want to grow a few different things that I didn't have room for. I have acreage, but I also have a large deer population. The deer would decimate any unprotected area so I'm keeping my garden small. My ultimate goal is to get a high tunnel that should thwart the deer. It's that or obtain a hunting license, sit on the front porch, and wait for them - not my first choice.

Growing in the garden is not quite complete for 2022. I have red beets growing nicely in a raised bed under a screened frame. That's another first. I had one or two beets grow in a bucket last year, but I may actually get enough to freeze-dry a batch this year.

It's time for me to go through my seeds and see what I have left to use next year and what I want to order. It's never really too early to stay organized.