It really was a close run thing 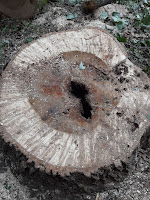 Yesterday, after what seemed like a long delay, the tree trimmer returned to take down the massive poplar tree that grew outside my office windows. It may seem strange for us to cut down a seemingly healthy tree, but those of us who live in the country know trees have a lifespan. We began to suspect the tree was at the end of its health and we were correct.  The sudden problem with branches dying was a sign of a worse problem. Once the tree was down, it was clearly evident the heartwood was dying. I feel like we cut it down in the nick of time.
The poplar was about eighty feet tall and big. Like really, really big. Coming home and driving up the lane, anyone could see it rose above the maples. For over forty years I've watched that tree drop a single yellow
leaf on August 1 every year. I found that amazing. 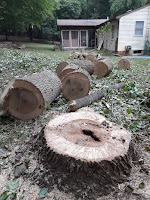 What was not amazing was the tree taking an odd twist on the way to the ground! The picture does not do it justice. The tree trimmer went up the tree like a squirrel and cut off branches along the way. Then he cut the trunk, section by section until about thirty feet remained. It was then things took a turn. It only missed the house by about six feet.

Himself was in the house at that moment and he said it sounded like a bomb went off when the trunk hit the ground. Cousin Dave and I were parked along the upper stone fence, perched on our respective tractors to watch. Dave's tractor is orange, not green, but we don't hold that against him.

When the tree hit the ground, I must have made a noise. Dave kept asking if I was okay. Okay? Noooo. Not much, at least at that moment.

I'm pretty sure it rattled the tree trimmers, too. They had a guideline on the tree with a lot of tension else I wouldn't be sitting here in my cozy sunroom office telling the story. I'd be looking for a place to live.

While I appreciate the tree trimmer and his abilities, it may be a while before he gets to come back.

Today, Himself and I set ourselves to the task of cleaning up the brush from the tree. I started around eight o'clock, and he joined me around nine. I really wonder how in the world we managed clean-up before we had a tractor. What took one day with the John Deere took several days without. As I type this, the fire is still smoldering, but I can keep an eye on it from the office.

My skyline looks different. The poplar dominated it for many years. While we worked today, we both commented on how much more sunshine reaches into the woods. With the tree gone, I wonder if the spot would be good for my greenhouse. I think I'd really like to have it just outside my office window.

Before we started the clean-up this morning, the young buck meandered through the yard and stood staring at the mess as if perplexed. He and I get along tolerably well so I stepped out onto the porch to speak to him. He stopped, flicked his ears and tail, and then went on his way, carefully stepping through the leaves. I suppose tree branches and leaves on the ground are not an everyday occurrence in his world.

Thankfully, it's not in my world, either.