The jungle in the woods 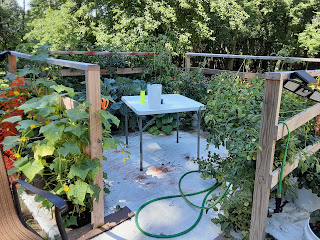 There is a jungle in the woods. My garden corral is growing abundantly! For 2022, I've ended up with four different varieties of tomato, cauliflower, broccoli, cabbage, cucumber, peppers, and potatoes.  All of them are growing in containers to maximize space. An in-ground garden isn't possible because of the number of deer we have living in our woods. I have plans to expand a bit, but it will take time, as in time to install a fenced enclosure. I want to design a system that is both expandable and movable, and lightweight enough for me to handle on my own. With the Grand Solar Minimum, I may need to move my operation to an area that gets fewer hours of direct sun.

One thing I really need to get over is planting every seedling transplant that survives. I have a difficult time discarding any baby plant. The Veranda cherry tomatoes are proof of that.

The bottom line is that I'm enjoying having a little garden to tend. It's not enough to feed us all year, but having a few fresh things on the table is something we both like. I ended up having only seven cabbage plants survive, but that's seven batches of fresh Cole slaw during the growing season.

I've learned a lot this season. I know why half my cabbage didn't make it. I didn't plant it correctly. Now I know. I also know I didn't get it under netting fast enough, too.

Enough blogging for now. I need to take a basin and harvest some of the Roma tomatoes and at least four cucumbers. I might have to pull up and discard one of the cauliflowers that has been looking poorly. There's no point to continue to water it if it is dying.

There's a certain peace in the garden corral, and we all need a little bit of that in our day. Where do you find yours?