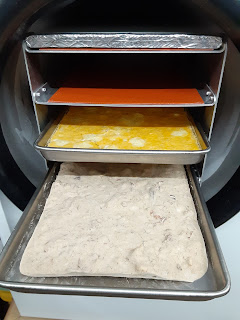 Have you noticed how people love to spout statistics at you like you're to blame for whatever it is they're talking about? Me, too. And this is NOT that. It's about not wasting the grocery budget, not feeding the world on the 20% of food gone bad the average household tosses out each year.

The food that goes bad in my fridge will not feed the world. It won't feed anyone, especially me because that fuzzy stuff growing on it is a deal-breaker, in my opinion.

Several years ago the spousal unit and I pledged to make a concerted and serious effort to plan our meals in such a way that we didn't throw as much food on the compost pile. We eased into it by deliberating cooking more to make enough for two meals and then freezing one. That will always work for us, but there are some things that do not freeze well, such as bean soup. Bean soup turns to mush when thawed.

Now the question is will it be mush when reconstituted after being freeze-dried? It may be a while before we find out. As this was leftover bean soup, it was perfect for the experiment to find out.

Along with the bean soup, I did several trays of eggs. My complaint about the eggs is that the Mylar bags that came with the Harvest Right freeze dryer are large enough to hold two dozen freeze-dried eggs. I need to get smaller bags as there are only two of us in the household. It will be a while until we dip into that pouch, and I think the solution will be to transfer the eggs to a Mason jar once the bag is opened. I can then vacuum seal the jar.

We have a new "normal" when it comes to the foods available to us. The grocery stores, even Walmart's grocery, now lack the variety we've become accustomed to. We'll be fine because we have a new way of thinking, and more importantly acting on the steps necessary to have food security.

I never thought there would come a day when I worried not about being able to purchase food items, but actually finding food items to purchase. It's been a sobering two years.

We remain thankful for the position we're in. We've worked hard all our lives, worked hard to live debt-free, and we can do things like purchase a freeze dryer and work to secure our future.

Nothing is ever easy, nor is it free.

We didn't like to throw a lot of food away either. Then we bought piglets and fed them our leftovers. They became hogs and we butchered them for food. The circle of life works out.