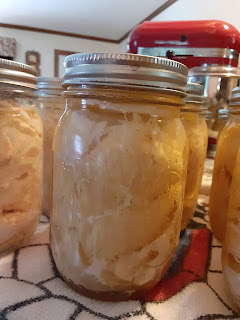 We're coming to the end of a most unusual January for us, weather-wise. Our local weather guru maintains a fact-filled website that I frequently consult. According to years worth of data, our average January temps hover at 30F. We won't hit the mark for 2022. It's been cold. Our high today was 22F. It's still much, much, much better than January of 1994 when we saw a record low of -21F.

Yes, I'm ready for our traditional January thaw, even if it's not arriving until February.

My project of the day was canning another batch of chicken along with four pints of stew beef chunks. I have a Presto 23-quart canner that will process eighteen pints at once so I planned accordingly. I also FORGOT to get a picture, so I dipped into the files for an old one of Chicken Under Glass, as we refer to it.

All four pints of beef sealed, as did eleven of the chicken. Three jars did not seal, and those jars had Harvest Gold lids. Was it because of that brand lid? Three other jars with the HG lids sealed just fine. I can't say I've had any trouble with HG lids, so did it have something to do with the cold weather? It's something I'll keep an eye on and track.

Those three jars were not lost. I let one of them cool and set it in the fridge to chill and I'll make a batch of chicken salad for our lunches this coming week. The other two jars went into filling for baked chicken pies. I made two pies and we had one for dinner. The other is in the freezer for another meal down the road. The remaining filling has been bagged, labeled, and frozen for use over toast or biscuits before winter is over. A failed seal rarely means lost food. Sure, I had to toss today's menu out the window, but not any food. It's all good.

But I am going to research the temperature thing because you never know. If it possibly can have an effect on the jars sealing, I'll avoid canning when it's this cold. It's just one more thing to learn on this journey.