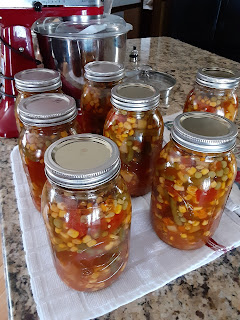 Last January, I canned vegetable soup and we opened the last jar back in mid-December. In 2021, I followed the Ball Book closely, but this year I went just a tad rogue. I had several small baggies of leftover veggies in the freezer and those, along with a small baggie of frozen diced potatoes, were added to the mix. That's really not much of a transgression. Because I add small bits of beef to my vegetable soup, the quarts have to process for ninety minutes. Beef and potatoes both require the ninety-minute process time so it's all good.

We're in the waiting phase now. Tomorrow morning I'll wash the jars, test the seals, and put the jars on the shelf. It may seem strange, but if a jar would happen to not seal, or come unsealed, you have twenty-four hours before you need to throw the food out. So in the morning if a jar has unsealed, guess what we're having for dinner? Just put the jar in the fridge and reheat it when we're ready. But I don't think there will be any problems. Each jar was bubbling when I pulled them out of the canner and each jar sealed almost as I set it on the counter. There was no siphoning, either.

Canning is both time-consuming and labor-intensive. I don't try to rush through any of it, so from start to finish, this project took five hours. This was the first time I used the weighted gauge "jiggler," which did seem easier than relying on the pressure gauge. The pressure gauge still worked so I was able to determine that the jiggler kept the internal pressure level at ten psi without any intervention from me. I brought the water to almost boiling, put the lid on the canner, and set my stove to where experience has taught me is the "sweet spot" for pressure canning. I allowed the canner to vent a steady stream of steam for the required ten minutes and set the jiggler in place. I watched for the jiggler to start jiggling, which coincided with the pressure gauge reading ten psi. I then set the timer for ninety minutes, and simply monitored all was proceeding as it should.

My only concern was the amount of steam the jiggler allows to escape to regulate the pressure. My canner calls for three quarts of water to be used to process under pressure. I paid a fair amount for the canner, a Presto 23 QT, and I did not want to run it dry. I didn't need to worry. Several inches of water remained when the batch finished.

I doubt I'll ever stop learning about home food preservation. Methods are improved and new products make the process easier. It may not appeal to everyone, but for me, it's a simple country pleasure that reminds me of my roots. And I like that.