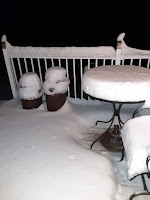 Living rural as we do, my family is comprised of weather watchers. We watch for trends and cycles, and we know that the first week of January is typically when we get our first measurable snow. Right on time, Mother Nature brought us a bit over six inches.

The official forecast was for one to three inches, but this weather front was tracking in from the southwest, turning north along the Blue Ridge of the Appalachian Mountains. The spousal unit and I figured it would be more than three, but we didn't think it would be almost seven inches. 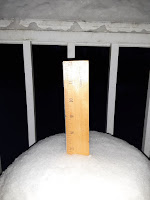 Everywhere I look the world is white and beautiful. Before long, when the sun rises above the mountain, it's going to be dazzling. That may not be such a pleasing thing when I go out and hop on the John Deere 1023 to clear the lane. The wind is picking up, too, and this snow is very powdery. It's blowing off the trees in whirls of mini-blizzards.

I hear people bitch about snow, how they hate it. They fail to see it as a simple country pleasure. A woman I've known since I was eight years old moved to Florida ostensibly to get away from winter weather and snow. It's a lame excuse. You can run from geography but not yourself. I have a different take on the "barrenness" of winter. 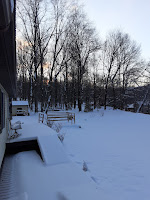 Looking out the windows of my sunroom office, I see the green of many holly trees and the neighbor's pines. The trees stand straight and tall, not slumbering, but preparing. The blanket of snow hides what is happening with the daffodil bulbs and its chill tells the bulbs to get ready. It has brought needed nitrogen which will melt into the soil to feed green growing things. The air has been cleansed of dust and allergens and smells clean. High up in the trees, the squirrel nests are full of little furry bodies that will emerge with the sunshine and race about on those branches cleared by the wind. The snow on the roof will melt and fill my cistern which will in turn water my summer garden. I could mention all the birds, but we have a red-tailed hawk in residence and the little birds, wisely, have mostly abandoned us - for now.

No, I don't mind winter or the snow.  Snow is the first harbinger of the coming spring, an early emissary we fail to acknowledge as such. I see its promise all around me, a promise it keeps every year. I can't imagine not being here on the manor to accept that promise and reap its rewards. And so I am grateful for the snow.