Working in a wintry mix - in comfort! 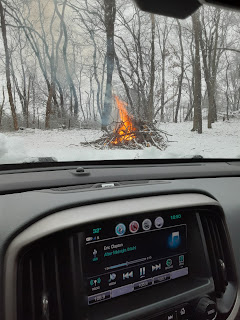 Happy anniversary to Holly Tree Manor! The blog is three years old and has two hundred eighty-eight posts, and nineteen pages now. I like to look back and see what I was doing a year ago, and apparently, I was amused by finding a counterfeit bill someone had donated to where I worked.

We woke to a wintry mix this morning. Snow, sleet, and rain all fell at the same time. I gave it an hour or so to cover the ground and headed to the west forty to burn a rather substantial brush pile.

I say "brush" but it was a lot more than that. Taking down three large trees made quite a mess. A lot of the brush from those days was disposed of promptly, but as we got into the actual cutting and splitting of firewood, we created more. This pile had some large chunks in the middle and I knew from experience this pile would burn for hours and hours. I needed snow to be on the safe side, and this morning I got it.

Experience has taught me a few other things, too. I drove the Colorado over and parked it at a safe distance. Once I lit the fire, I hopped back in the pickup and watched the fire in relative comfort. I had a heated seat, a good stereo, hot coffee in my fave travel cup, and my dog in the backseat. That was at nine o'clock this morning.

It's after six and after dark, and a lot of hot coals are still blazing in the rain. And it's raining pretty hard. I'm not worried about any sparks given how wet it is outside. The rain will create a cold crust over the top of the ashes and the coals beneath will continue to smolder until they've gone to ash. What's left, the potash, can be used judiciously in the garden.

I can check the brush pile off my To Do list, at least for now. It never takes long for a new one to get started. Some rainy summer day, I'll burn again. Burning in the rain is a safety measure. And yes, we'll sit in the pickup with the AC on and watch the fire. Work smart, not hard.