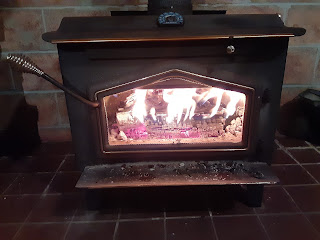 It's cold outside! The Weather Channel, or what the hell ever entity, has dubbed this massive storm/cold front/artic blast Winter Storm Elliott. The snow and the cold don't bother me too much. We live in the country and we prepare for such things. Wind gusts are another matter. We don't much like the wind even though it delivers firewood to the ground.

Now is the time all the hard work my cousin and I did scant months ago will pay dividends. Cutting and splitting firewood was a job that seemed to go on forever. Just yesterday, I burned off the brush pile from this year's work, but I can't say the job is finished. It never really is.

Having a woodstove and firewood stockpiled is a blessing, especially during these cold snaps. We watch the weather forecast and know from experience whether or not to get a fire burning. Our winters are a mixed bag, and typically we burn from mid-December to mid-March. When the temps are in the forties and above, the heat pump works fine. We just need to remain aware of what's happening outside.

That type of awareness may seem like a lot of hassle to some people, but it's not. I grew up with it, and the Lord of the Manor developed it once he moved here twenty-eight years ago. He was of another mindset at first, but the winter of 1995-96 brought him around to my way of doing things.

The country way. Long may it thrive!