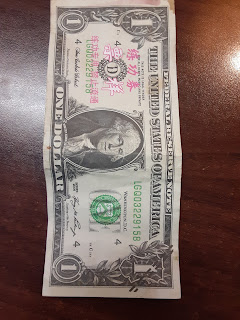 I work for a non-profit, and we accept monetary gifts that we then distribute to people in need. While logging a donation, we got faked out by a fake.

Seriously. Counterfeit. We had a laugh, took pictures, and the CEO turned it in at the bank. I'm sure it wouldn't have been as amusing had it been a hundred-dollar bill. It was mixed in with other bills so we're sure that the person who dropped off the donation had no clue it was in there. And they received it from another source, as well. Non-profits are a money-maze, giving to each other as needs arise.

If it feels fake it probably is. Be careful out there.