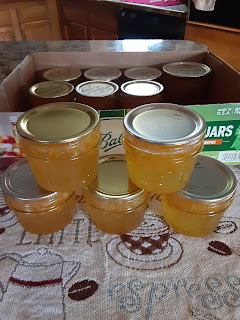 Making orange marmalade was more than I bargained for. I'm pretty sure this batch will be a one-off. I scorched the first batch when I stepped away from the stove for mere seconds to open the door for Loki. The second batch turned out great, but it's very labor-intensive.

To make it, you have to peel the zest layer of the oranges and lemons without getting any of the pith. I then used a food chopper to cut that up instead of cutting it into the traditional thin strips. Then you have to get the fruit removed from the pith and the membranes. Nope. After this is gone, I'll purchase orange marmalade.

Yeah, I say that now, but by the time I've used twelve little jars of this marmalade, I may feel differently. Himself doesn't touch the stuff. He's a grape jelly kinda guy. So it may be three or four years until this batch is gone. By then I may have (probably will have) forgotten what a pain in the ass this was to make and do it again.

I'm with him. I'm a grape jelly person. Though I upgraded to grape jam, easier to spread. I never did like orange marmalade. I don't know why. But I like oranges.

Orange marmalade was a holiday thing when I was growing up. My mother would get the smallest jar she could so it would get used up fast. I love it but it really was labor-intensive and I'm not much into that when it comes to cooking and such.