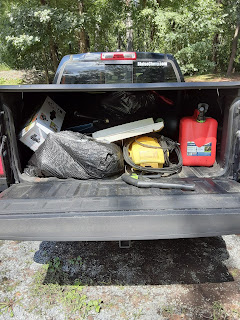 It's almost a joke here on the manor. Yes, Himself is very handy to have around because there is very little he can't repair once he puts his mind to it. I like that in a man, I really do. But sometimes the time, and the inclination, get away from him and those "promised" repairs do not happen nor will they ever happen.

After almost thirty years, I'm well aware of what will and what won't get fixed.

Today we were in the shed preparing some spray to *murder death kill* any bug living near the patio, and we were discussing the need to tidy-up the implements hanging on the pegboard. The next thing I knew, I had a truckload of junk to take to the dumpster.

I'm not sure how it happened, who said what or what started the de-cluttering, but I'm really glad it happened.

Maybe next weekend it will happen again. #hopeful

I could have blogged about the 20th anniversary of September 11, 2001, attacks on the United States of America, but I truly have little to add that has not already been said. If you can't see that tragedy has been compounded by more tragedy, you don't want to know my opinion. If you do see the tragedy of the last eighteen months, then you know and I don't need to tell you what you already know.