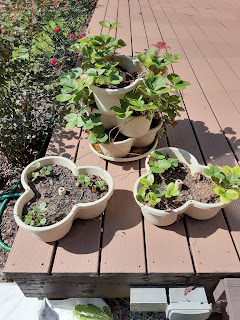 We're hosting the Cousin's Lunch this coming Saturday, and I thought I might make a cheesecake. It's that or an apple crisp. Maybe both. The future is unwritten and who knows where the spirit may lead?  Or maybe dessert will be a good, old-fashioned apple cobbler and I'll keep the cheesecake for us.

Last winter we ordered two dozen strawberry plants from Burpees, a very well-known company. The plants arrived a little late for planting in my area (strike one), and because of that, only nine of the plants lived. That's not a good margin of success. I doubt I'll order roots from Burpees again. A local nursery seems a much better option if I go for blackberries.

Several of the stronger plants did produce a berry or two which was enough to pick and eat on the spot but nothing more. Those stronger plants have also sent out runners and the sets seem to be taking hold. The plan is to move them into the greenhouse this winter since they are in containers and not yet the ground. I hope to get a harvest in 2022. 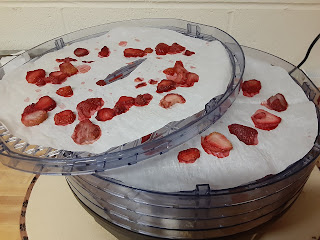 With cheesecake on my mind, I pulled a bag of sliced strawberries out of the freezer and spread them out on the dehydrator trays. Once they've dried to a light crisp, I'll put them in the coffee grinder and turn them into a powder to add to the cheesecake batter. It will only take a tablespoon or three of powder to intensify the strawberry flavor. Powders are a great way to take the flavor to the next level. Beyond that, green powders can add nutrition to soups and other dishes. Himself hates spinach but doesn't balk at a tablespoon of spinach powder added to some dishes. The trick is to only add to the point where it may become detectable and stop.

Another perk of dehydrating strawberries is that the house will smell of delicious strawberries for several days. The man of the manor is correct in one thing. Spinach doesn't add a thing to the air.