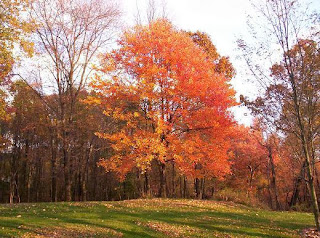 This September has been a busy month for me. I'm technically still employed although I work from home quite a bit. But September is budget-setting time so I've been in my town office more than I like these past few weeks. It didn't make me jump for joy but it was necessary. My employer has bent over backward for me so I can bend a bit, too.

There are still good places to work out there. My best advice to you is to find one and prove yourself worthy of loyalty. Anyway...

September. I cleaned up my garden corral and planted another packet of radishes, which are doing quite well. The strawberries finally look good. Apple canning went splendidly. I said to hell with worrying about the pandemic and went back to the bowling league. I pondered my place in the universe far too many evenings, I read a lot of smutty books, and I didn't write or blog nearly enough. And come Saturday, I'm hosting a Cousin's Lunch.

I'm suddenly the "middle child" between my two surviving first cousins, both guys. The older one called me a bit ago to tell me his wife was bringing an apple cake. I'd planned to make an apple cobbler or crisp, and I still may. He's also bringing his baked beans made with apples and root beer. Oh, yeah...

I'd report in on the younger cousin but they went RVing so who knows what mischief they got into, right?

We also spent some time at our little shooting range this month. It's fun as long as we stop after a few magazines and/or cylinders. Too much is just too much and ammo isn't cheap these days. Deuce doesn't like being left inside when we're outside, either. He howls.

It feels like the month sped past me with barely a break. I hope October will have a slower pace as the leaves begin to turn in earnest. Our showiest maple already has a few bright orange leaves and I hope it puts on a show this year. There's always the chance I won't live to see it show its colors another season, so I want to savor it, and October, the best month of the year.