Tractor work at the shooting range 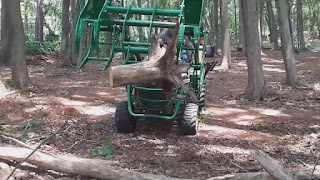 We decided to create a designated shooting range. We've been killing bales of straw for a while now and making sure the occasional dead tree was really dead, but we felt it was time for something in a more protected location. The "west forty" has the perfect hillside for safety.

We went back and forth a bit but eventually concluded that a stack of dead tree trunks strategically placed at the base of the hill would stop any bullet that went wide of the target. So will the hillside but we had the option of stacking the deadwood or burning it, and we chose to stack the solid lengths. Some were too far gone and those went to the burn pile. And some of those dead tree trunks are there temporarily and will end up as firewood in the stove some cold winter day.

It may seem strange to some that we want a designated place to practice, but practice makes sure you can hit what you're aiming at - like the friendly raccoons and the not-so-friendly copperheads. Believe me when I say I'm more of a threat to society when I get behind the wheel of my car than when I'm target shooting.

Putting in a range is a lot of hard, physical work. There's no way we could do it without having the John Deere 1023 with a Brush Crusher grapple. While Himself was running the tractor, I was lounging on the John Deere x370 shooting a few videos. I managed to piece them together and get them up on the YouTube channel.

One thing I'm rather sure of is that I'll never make a good videographer.