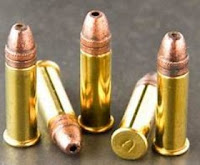 The Second Amendment provides a mechanism for the people to overthrow the government by allowing the common man to own and use firearms. The right to bears arms, as it's stated.

I'm someone who likes to eat food that I've preserved because I know exactly what is in the jar (and it's NOT chemical preservatives).

So here we are at the beginning of the summer of 2021 and I can't buy ammo or canning jar lids. Now if that's not the strangest combination of shortages, I don't know what is. What's even stranger is that Blogger REFUSED to load a picture I'd titled "ammo."

Ah, but is it really strange? I do not think so. You can call me crazy but I really think the "little guy" is under attack from all sides.

Blogger also refused to upload the picture of canning jar lids at first. I had to do a screen snip. What the hell is so dangerous about canning lids?

I'm getting very suspicious about some of these shortages. I live in the country and we have copperhead snakes for neighbors. I need bullets. And as for not uploading a picture of a bullet, I don't think a PICTURE can harm anyone. People are fucking nuts these days. The gun doesn't pull its own trigger.

As for the jar lids, it makes no sense at all that I can purchase all the jars I want (the jars come with lids and rings) but I can't get just the lids. I have jars. MASON JARS don't even need to be recycled! Just wash and re-use. Is it a problem that I want to can fresh veggies, make and can homemade salsa, and cowboy candy? Boy, that's a subversive activity.

This is why we country folk turn into preppers and even hoarders. Manufacturers have no clue as to what is really important to us. We don't need no stinkin' diamond rings, Ubers, or meal delivery. We need everyday items like canning jar lids.

I think we're all being played by the government and the people pulling the strings behind the government. They're setting us up for something big.

Just saying. You know...while I'm still free to say it...