Who really wants to walk the length of the Nile? 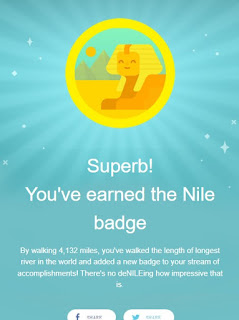 Several years ago I got a Fitbit Flex to track my steps. Having an office job, I sit in front of a computer all day. On top of that, being a writer puts me in front of the computer a lot as well. I've always made it a point to get up and stretch, but how well was I really doing? I thought a Fitbit would help and it has.

I bought into the whole ten thousand steps a day thing. That was my goal and I did pretty good meeting it three or four times a week. I figured out a loop around my office building that was over six hundred steps and I did it once an hour while there. Walking the dog and just going about my day did the rest. It wasn't until one night about eleven o'clock that I put the kibosh on getting 10K a day.

No way did I really need to go outside in the dark and walk out to the end of the lane and back just to see the little rocket ship on the Fitbit Charge2 blast off. That's when I knew I was placing far too much importance on a number. Now I consider anything over seven thousand steps, or approximately three miles, a day a bonus.

Maybe I'm not doing as well with letting go of the numbers as I thought. This week, I got an email from Fitbit awarding me the Nile badge.

I've graduated to a Fitbit Versa2. My first thought upon viewing the email was I would have gotten this a lot sooner if my old Charge2 had not repeatedly unpaired itself and not reported my steps.

No, I'm not far enough along on my journey to let go of the numbers. My whipping out the calculator to figure out how fast I can get to 5K miles was proof of that. I'll report back sometime in August or September. Or not.

PS. I've also blogged about this over at Deuce's Day. Deuce has walked a good portion of the way with me and deserved a badge of his own.