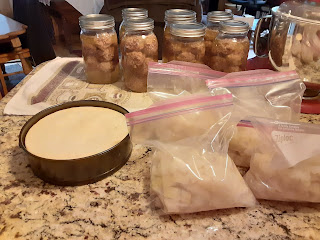 Yesterday, I fed my addiction: I canned meatballs! And not only did I put seven dinners worth of meatballs into jars, but I also made a cheesecake in the Instant Pot while the pressure canner was busy cch-cch-cching away. And then there are the four meals worth of diced potatoes blanched, bagged, and into the freezer.

It was a busy morning!

At first, I thought I'd can the potatoes but after a brief discussion with the man of the manor, I decided to go the diced route. The potatoes were just on the cusp of beginning to go soft so this was a good way to save them. They will make great home fries or even potatoes and eggs.

The cheesecake was done on a whim and is the dessert for Sunday dinner, which will be something with meatballs. I had one jar that didn't seal because I think I tightened the ring down too far. I could freeze that batch, but meh. Let's eat them! As for the jarred meatballs going into the pantry, as the price of ground beef rises, I'll have six dinners at yesterday's beef prices. I have another five-pound pack of ground beef (88/12) to brown off and then decide if I want to freeze it or can it in pints.

It was a labor-intensive morning, but it was for a good cause - my pantry.