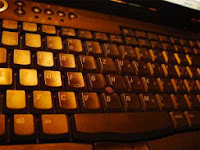 As I begin this blog entry, it's about five-thirty in the morning. Deuce and I have been outside so he could sneak off into the dark woods and do whatever he needed to do.  I could hear the leaves crunching under his paws as he searched for his spot. It was that quiet. Orion hung above me to the south, an early morning companion to warn me of the approaching winter. In the coming months, he'll be with me overhead late at night, telling me that spring is coming. He has always attracted my attention.

Deuce doesn't linger in the early morning. He likes his creature comforts in much the same way his puppy parents do. He rejoined the lord of the manor in the bedroom while I brewed a cup of coffee and landed at my computer.

I think there are many things that can be said of these still moments before daybreak. I appreciate my place in creation as I look into the moonlit woods. I am the tender of this place in this time. What it will become after I'm dust, I don't know. I ponder such things just before daybreak.

Standing at the window in my office, I watched as the driveway lights popped on, one after another in sequence as something approached, finally coming near enough for me to see the young buck. He's headed for the other side of the hill, into the thickets, to rest for a while. We know he and his harem hide out there and so we have no plans to go into that section of the manor and clean out the underbrush. He may rest there undisturbed for as long as he's with us in this life.

Daybreak is slow, and yet it happens almost in the blink of an eye. One moment the trees are a blackness against the stars, and the next the stars are gone and the trees have individual silhouettes. Shades of gray give way to silver, which in turn gives way to blue hues and eventually, for today, rays of sunshine.

Watching the woods wake is one of the many simple country pleasures in my life. I wouldn't trade it for love or money.