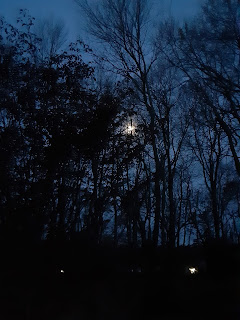 This time of the year, the moon shines through my most westerly facing windows just before dawn. While it's lovely to lie in bed and enjoy its journey, I'm in bed. When in bed, one should be sleeping, not moon gazing. Alas, it's an imperfect world. Planetary orbits and such only allow me to "enjoy" the view one month out of the year.

The full moon in November is often called The Beaver Moon. Or you may hear it called The Frost Moon. November is usually the month when we have our first frosts of the season. Calling it The Beaver Moon refers to a time when beavers were plentiful and busy at work fortifying their lodges for the winter.

Another bit of moon wisdom came from my late father. He always said it's colder at the full moon. Was he correct? I think so. I've paid attention over the years and it seems to me that the nights are certainly cooler during a full moon.

Ancient alien theorists postulate a theory the moon is hollow and is an observation base. I can only imagine what the aliens think if they're really parked on the moon watching as our world goes mad. They probably are up there, making book and placing bets. What else is there to do on a huge space rock?  I do believe we are not alone.

In a few short nights, the moon will no longer be my dawn companion and I'll get a few more moments of sleep. Not that I believe sleep to be an adequate trade-off for a peaceful view of traveling Luna.