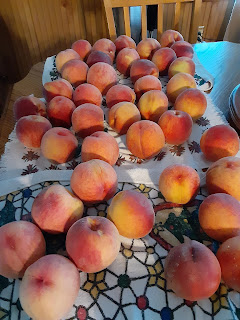 I heard the peach harvest this year was exceptional, and from what I saw at the orchards it was not a lie or a marketing ploy. I made the drive to a local orchard my grandmother favored for peaches and brought home a half-bushel of Bounty. They were huge!

This local orchard has been family-owned and operated for a few generations. I like to see that sort of stability. Anyway, I went and bought peaches. 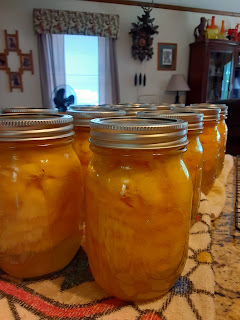 These peaches were, no lie, bigger than my fist. I'd never heard of Bounty peaches, but they looked and smelled wonderful, plus they're a freestone variety. I've since learned they were developed at the USDA peach breeding program at Kearneysville, West Virginia, which is just a tad more than half an hour from the manor.

Once I had the peaches home, I immediately began to process them, canning them in pint jars. I got twenty-four pints of canned peaches and one batch of peach jelly. It was an intense two days but very much worth it.

With so many pints on the shelf, I won't need to can peaches again next year. I suspect it will take two pints to make a pie, but that's okay. I didn't want to process them in quarts and risk opening a jar to have peaches for dessert and not using the entire contents over the course of a few days.

Home-canned fruit is good in the sealed jar on the shelf for at least eighteen months. I personally am not worried about fruit that is jarred longer so long as the seal is intact.

And that's the key to safe consumption. The seal must remain intact. If you take a jar off the shelf and the lid falls or lifts off in your hand, throw the food out and sterilize the jar. Don't risk eating it. It rarely happens, but a seal can fail so be mindful of it.

I'm looking forward to canning apples, but that won't be such as intense process. Apples keep longer than peaches so I won't need to do them all at once. I'll also be putting apples in quart jars. Some of the newer varieties such as Gala are available now, but I want Stayman or Winesap which are older varieties and will, I hope, capture the flavor of my grandmother's pies.

Summer fruit and winter pies and cobblers. It's worth the work.

If you want to learn more about canning, please visit the National Center for Home Food Preservation at https://nchfp.uga.edu/. This is your preserving bible.